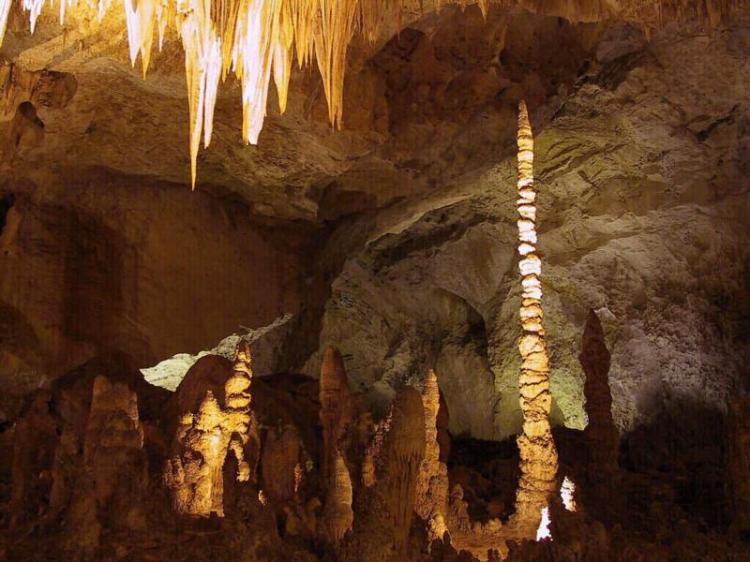 Caves and caverns might sound like a lunatic’s interest or geologists muse but not when its a national heritage tourist attraction. My adventure extravaganza began 60 feet underground in this cave which is a preserved site now.It was a dark dingy cavern with a crude path elevating and disappearing at sharp turns, abundant with limestone mineral rocks and wrinkled crooked stones. A gradual seismic activity brought over this cavity in the earth and it deepened unfazed till millions of years flashed by.The end result is this cave preserved like a jewel box to the mother nature.An overdose of stalactites and stalagmites hung quietly everywhere and stood uprooted frozen in time since 400 million years.I bet you will be delighted and surprised simultaneously to visit something so ancient yet so vivacious, so lifeless yet so enriching and brimming, so repetitive yet so astonishing.

S and S (read stalactites and stalagmites), soda stones and flow stones hung like silver transparent and translucent chandeliers from uneven ceiling rocks and the dripping water echoed in the narrow zones.Hollow glass straw structures punctured up through the rocks like wild grass in bunches. Like shark jaws the conical stones shone through the artificial hidden lighting scattering rays everywhere.Though the path was crude but the show was refined and impeccable. Uneven dwarf pyramid stones like termite’s nest mushroomed everywhere. I could only imagine and reinforce the idea of being in a cavern that coexisted with the dinosaurs era.The magnesium, carbon salts in the rocks melted like lava,rippled and froze in hues of orange, silver,black, white and grey. They looked like bacon or clay but were hard cold and stones after all!Water dripped and rippled and giggled like a leaking umbrella and accumulated in puddles big and small and what pure water it was!

We were flabbergasted, gasped, flashed,photographed, sighed but could not pause to wonder at such discovered marvels;rediscovered again.These caves really put a solid show together exactly like a rock show!

I write whenever ideas crunch and overwhelme me! It's my reaction outpour. View more posts

2 thoughts on “Caution: Cave ahead.”